Exchange programm with Young Artists from Jerusalem & Nuremberg, supported by the EUROPEANS FOR PEACE program of the Foundation EVZ.

Last autumn, the Willy Brandt Center initiated a gathering of 15 young artists in Jerusalem. Eight of the artists came from Germany, the other seven from Israel. From February 25th to March 2nd 2020, the project was followed up in Nuremberg, where the same young people of different nationalities and different artistic backgrounds met and continued their joint artistic journey.

Nuremberg and Jerusalem – two cities whose historical contexts reveal unique contrasts, parallels and tragic connections. Therefore, the program featured an intense engagement with Nuremberg’s history, but also offered a vivid exchange of today’s lively art scene. The project’s participants from Germany offered their Israeli colleagues guided tours through the Old City of Nuremberg. The group visited museums, the former Nazi Party Rally Grounds (the Reichsparteitagsgelände), and Nuremberg’s university and Academy of Fine Arts. The program also included reflections, encounters and workshops with different artists, aimed to explore contemporary forms of expression and creative new techniques for intercultural dialogues. The participants’ journey and work process were once again accompanied and documented by a team of the National German Broadcasting Station ZDF.

On March 1st, the young artists presented their results in a public exhibition under the direction of stage director Annette Lubosch, writer Sascha Fersch, and set designer Maris Pfeiffer, at the Kunstverein Kohlenhof – a gallery at the center of Nuremberg. We were delighted to welcome an impressive number of visitors, all curious and eager to discover the visual, acoustic and musical creations that artistically mirrored the connections between Nuremberg and Jerusalem. This upcoming autumn, a selection of artworks from the exhibition will be presented at our center as part of this year’s Jerusalem Open Forum, under the title “Jerusalem and Europe”.

Jerusalem and Nuremberg – both cities with many unique spaces, buildings with historical importance, and monuments of remembrance. At some periods throughout history their names have been changed, carrying different meanings, functions and narratives.

Sometimes, the official narrative of a city coincides with our own story, but at other times they contradict each other. Either way, we are always confronted with a history that has already been written by others, who have decided for us what is important and what is not. With this in mind, the project “My Re-Writing” brings together eight young artists of different disciplines from Israel and eight such artists from Germany, with the aim to creatively re-write history for the future.

The artists from Nuremberg and Israel met for the first time in Jerusalem, where they spent a week together, discovering the city and each other’s art, under the direction of performer and theatre director Annette Lubosch and writer Sascha Fersch.

The program included tours through Jerusalem’s Old City, a visit to Yad Vashem and to the Musrara Art School. During the week, the artists also met with coaches and speakers from different disciplines, and reflected together on their experiences, feelings and different opinions.

Among our guests were Mrs. Dina Shefet from the Testimonies Program of Yad Vashem, historian Dr. Shalmi Balmor, and Dr. Rüdiger Hillgärtner – a professor of literature that spends his time between Germany and Israel. They shared their personal experiences regarding the development, challenges and opportunities for German-Israel relations over the last decades.

We were honored to welcome Prof. Bashir Bashir, who presented the book “Holocaust and Nakba”, in which leading Arab and Jewish intellectuals examine how and why the Holocaust and the Nakba are interlinked, while maintaining the fundamental differences between them. The book offers a new political, historical and moral grammar, which enables a joint Arab-Jewish dwelling and supports reconciliation in Israel/Palestine. We also reflected on the role that artists play in this process of rapprochement.

Nathan Diament, a Holocaust survivor from Brussels, shared his touching personal story of survival thanks to a Christian family that hid him and protected him. He also offered insights into the work of the Committee of the Righteous among the Nations. We were excited to discover the art and gripping life story of the great uncle of Nathan Diament, the renowned Bauhaus artist J. D. Kirszenbaum. This finding led to discussions about the role of artists and the freedom of expression in times of oppression.
On the last day, the participants presented their art works at the center to a group of art management students from the Hebrew University. The presentation was a great first landmark for the ongoing artistic journey which we have embarked on, and which we are looking forward to continue next March in Nuremberg.

The project “My Re-Writing” is a collaboration of the Willy Brandt Center and Musrara School of Art, in cooperation with the Center for International Encounters Jerusalem, ForumZFD, Academy of Fine Arts Nuremberg and the Friedrich-Alexander-University Nuremberg supported by the EUROPEANS FOR PEACE program of the Foundation EVZ. The participants were accompanied by a film team of the ZDF, whose report was presented in the TV magazine “Heute Plus”. 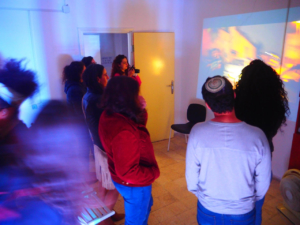 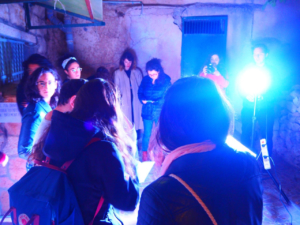