Interested in some spooky stories and secret tales of Jerusalem? We are looking forward to welcome you at our freshly renovated center and to kick off the new season with these thrilling outdoor events:

The Ibtisamet Maqdisi Band will put on a show with lots of fun and spectacular surprises for our small guests.

We’ll open the evening with a collection of the most captivating mysteries of Jerusalem’s spooky sites.
After that take a deep breath, relax and enjoy the highlight of the evening, the screening of the black-and-white movie “Phantom of the Opera” from 1925 with live music accompaniment by Maria Neishtadt.

Due to the Covid-19 precautions we will only be able to offer a strictly limited number of places. Therefore please register by sending an email to event@willybrandtcenter.org.

As we returned to the office after weeks of lockdown and home-office, it was time for a joint team activity. Ma’amoul is a typical cookie known in the entire Middle East, especially during Ramadan. Our Palestinian colleagues introduced us to the tradition and the recipe, and showed the team how to mix the semolina with oil and spices. The entire center was filled with the smells of the spices and rose water. After kneading the dough, we rolled hundreds of balls of date paste as a filling for the Ma’amoul, and created a small hole at the center of each cookie. Then it was time for the traditional shaping. and we used special grippers to give each cookie an individual and beautiful shape. Baking them in the oven merely intensified the good smell that permeated the center, and most of us simply could not wait to try these cookies; those of us who have been fasting needed to wait till sunset to give them a try. Finally, we distributed the cookies and shared them with friends and partners.

Since the new government’s agreement on the option to annex parts of the Occupied Palestinian Territories as part of their coalition treaty, the issue has been dominating the political discourse in Palestine and in Israel. As vague and as open as the plans and announcements are so far, the impact on the Palestinian population as well as on our partner organizations is expected to be intense. In order to analyze and discuss potential impacts on our partners and our work, forumZFD Israel & Palestine organized together with the Willy Brandt Center Jerusalem two background talks with experts from Israel and Palestine, for staff and partners.

Ofer Zalzberg, a political analyst at the International Crisis Group, focused on the concerns of the Israeli security establishment. According to many security experts, the annexation is an ideological step rather than one based on national interests or security. Xavier Abu Eid from the Negotiations Affairs Department of the PLO, and Naseef Muallem, Policy Advisor at the Palestinian Centre for Peace and Democracy, focused in the second session on the Palestinian perspective. After discussing the roles and options faced by international actors and organizations, they concluded that annexation would be the end of a negotiated two state solution.

The German Magazine BERLINER STIMME interviewed our Project Manager Tobias Pietsch on how Israelis and Palestinians work together during the time of the Corona crisis. The German article deals with digital meetings, volunteers supporting people in need, and the principals of cooperation:
BERLINER STIMME 4|2020: BEGEGNUNG AUF AUGENHÖHE

Covid-19 made us rethink the way we organize events and get creative. To fill the gap created by the suspension of events in Jerusalem and to connect with our supporters abroad, we established a new format: Zoom on Jerusalem. The interactive online event is aimed at shedding light on the various projects of the Willy Brandt Center, the daily life in Jerusalem and the political situation in Israel and Palestine.

On the first event, on April 26th, Project Manager Petra Klose presented the Art Hug Project and premiered the 18th hug by Dornbirn-based musician Lukas Schiemer. Petra also elaborated on the challenges for artists and culture in these times of pandemic, and Project Manager Tobias Pietsch shared his insights on life during lockdown in Jerusalem, illustrating these effects with pictures from the empty Old City of Jerusalem. In addition, the event offered a political examination and analysis of the formation of a new government.

The second Zoom event, on May 10th, focused on the effects of corona on the economy, unions and youth organizations. Project Manager Wiebke Warkentin elaborated on the ways in which her partner organizations in the educational project spent May 1st this year, and how the pandemic is affecting the work of the youth organizations. Members of the Political Team joined the Zoom to share their take on the economic situation in Israel and Palestine, and discuss the work of the unions, which has become even more important during this crisis. Tobias Pietsch explained the composition of the new government and its coalition treaty, including the controversial announcement of the annexation of parts of the Occupied Palestinian Territories. Wiebke and Tobias also showed photos of the various protests opposing the new government and its policies regarding the crisis, economic issues, labor rights, domestic violence and the planned annexation. The second Zoom on Jerusalem ended with a live view over the Old City of Jerusalem, while listening to the Ramadan Cannon, fired to mark the end of the fasting, followed by dozens of Muezzins.

As both sessions were very successful, enabling vital discussions in Q&A Sessions and an exchange between Jerusalem and our supporters abroad, we will continue this format soon.

Sign in to our newsletter and become a member of the support association to receive invitations and updates.

The Willy Brandt Center in Jerusalem works with forumZFD on various aspects of conflict transformation, including trauma sensitivity. At the end of 2019, a Global Team within forumZFD was established, together with social psychologist Wiebke Warkentin, to better understand the role of collective trauma in our field of work.

Through monthly calls, the Global Team exchanged knowledge and experience with other forumZFD colleagues worldwide. This format of exchange aims to explore how psychological wounds in violent conflicts are passed down from generation to generation, and the effects of this trauma – both on a community and its individuals.

Furthermore, assuming that sensitivity towards individual and collective trauma is inevitable when working in conflict settings, we believe that it is crucial to make trauma sensitivity a cross-cutting issue within forumZFD and to train their staff accordingly. Therefore, the Global Team has developed a recommendation catalogue for trauma sensitivity in the Civil Peace Service (CPS), and is now conceptualizing tools and trainings intended to assist us in addressing collective trauma in our work. There will be a joint publication at the end of the year on how an organization can take its first steps to become trauma sensitive.

On September 2nd we welcomed our new volunteer, Jost Weisenfeld, together with three other volunteers of the Diakonie Württemberg organization in Jerusalem. After a welcome workshop and a few days of orientation, Jost started to support the team in Jerusalem. The 21-year-old from Hessen is a member of Jusos (Young Socialists in the SPD) as well as The Falcons (Socialist Youth Germany), in which he has been active for more than seven years. Through his activism in Jusos, he participated in international summer camps and in a delegation of Jusos from Hessen to the WBC, where he first met partners of our political cooperation and learned about the project.

Jost supports the entire team in Jerusalem and all of the projects. Amongst his key tasks are accompanying delegations and assisting events at the center. He’s also learning a lot by joining delegations and activities of the WBC. One of his most impressive experiences so far was a political tour to the occupied Golan Heights, focusing on the geopolitical situation. But Jost is not only learning and supporting the team – he also offers input to the team. For instance, he presented a workshop on ableism, allowing the team to reflect on disabilities and the challenges that people affected by dwarfism face every day.

We are looking forward to a joint year of mutual learning and support, and a great time with Jost in Jerusalem. 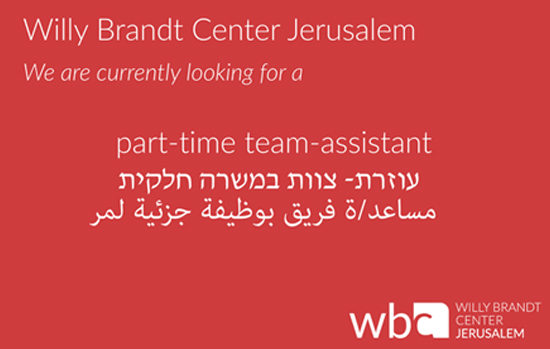 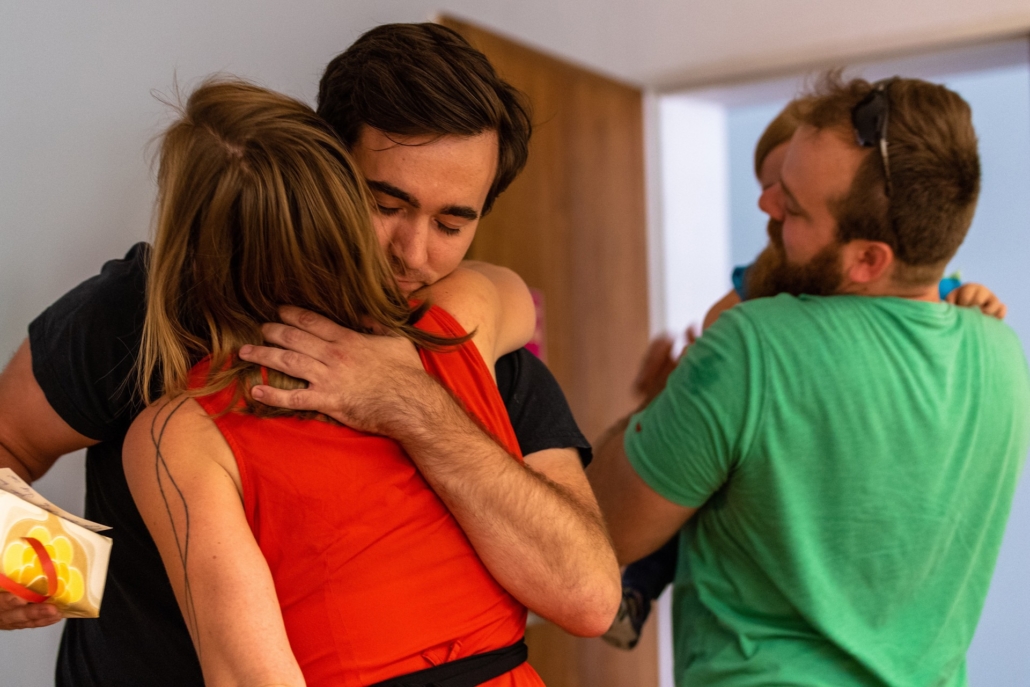 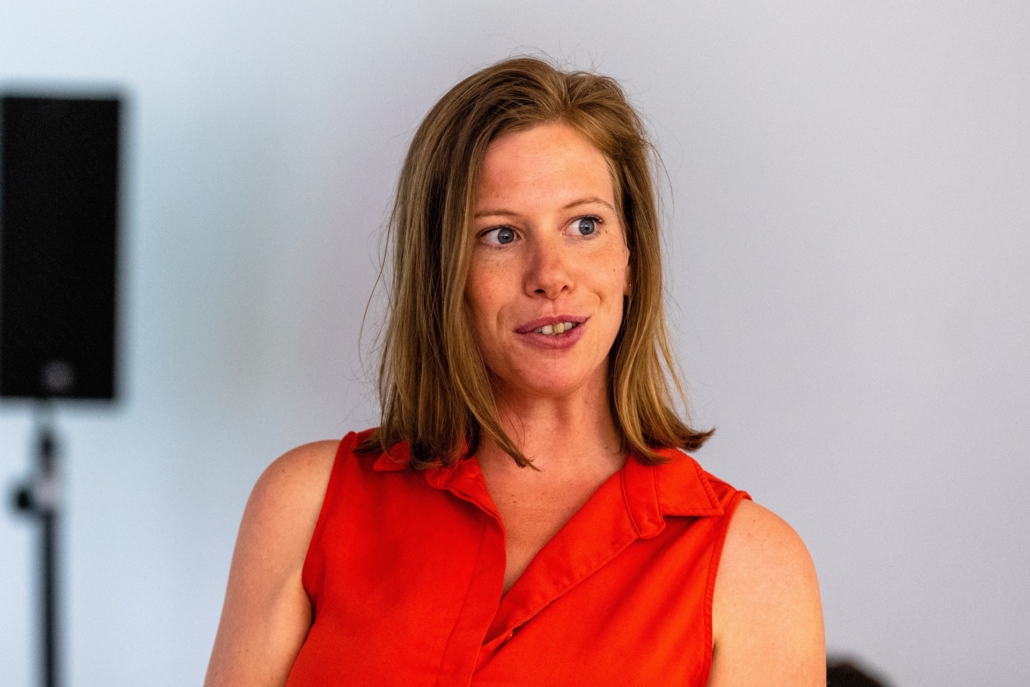 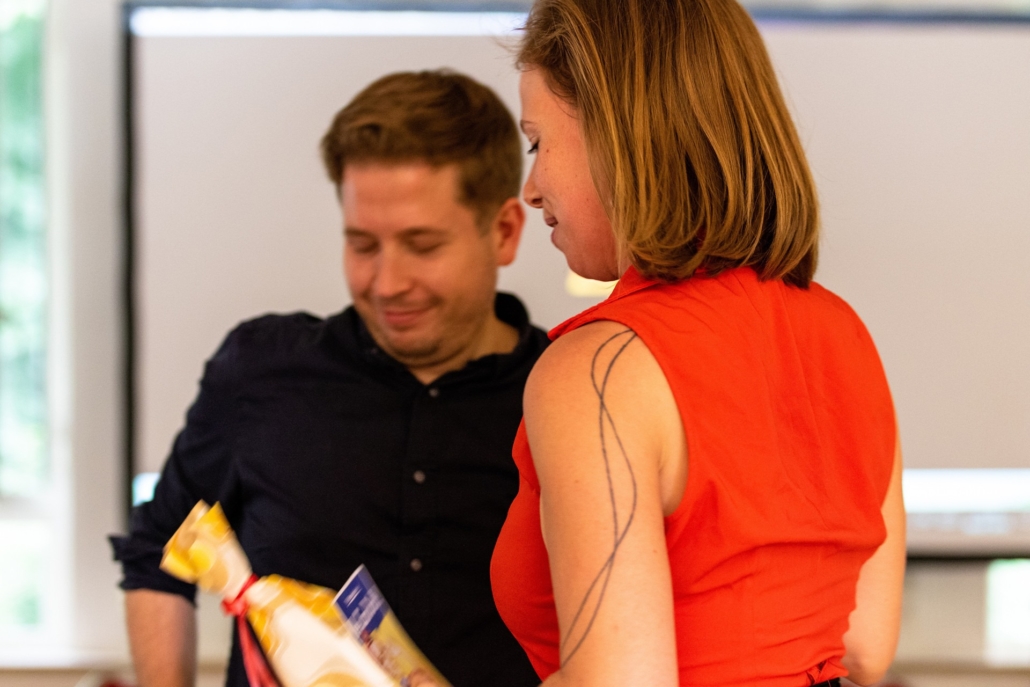 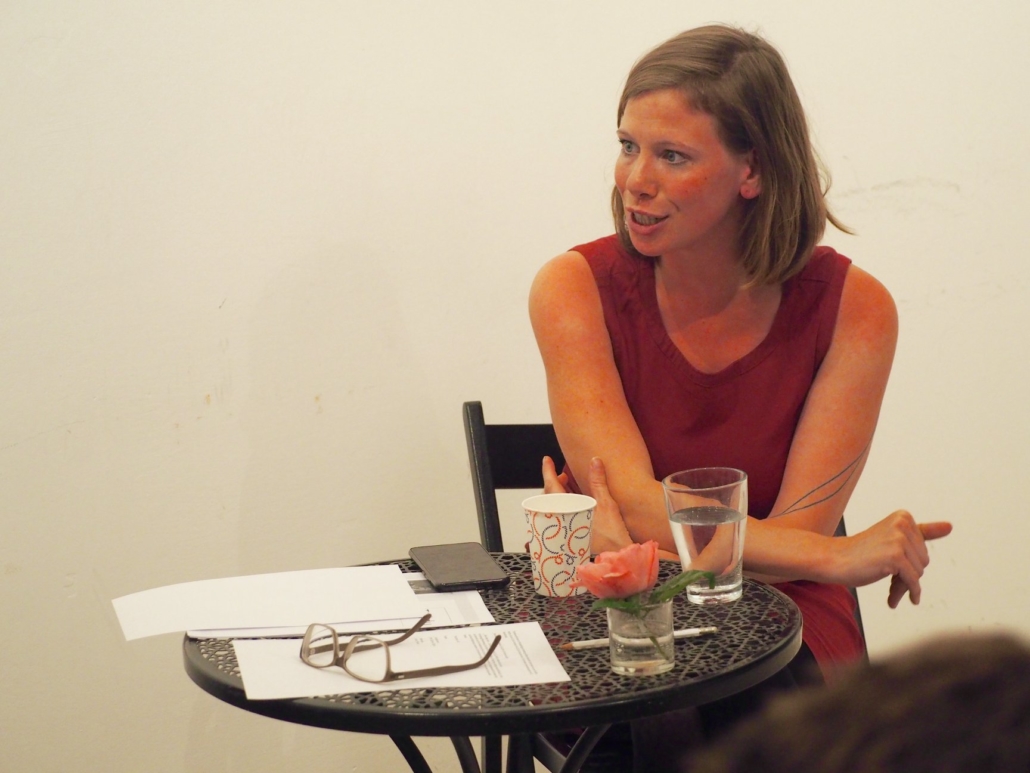 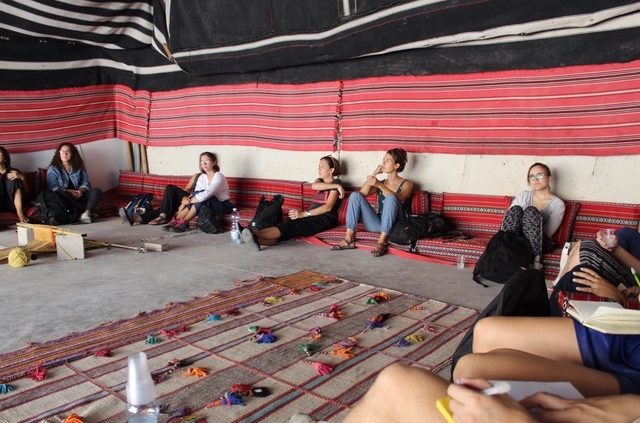 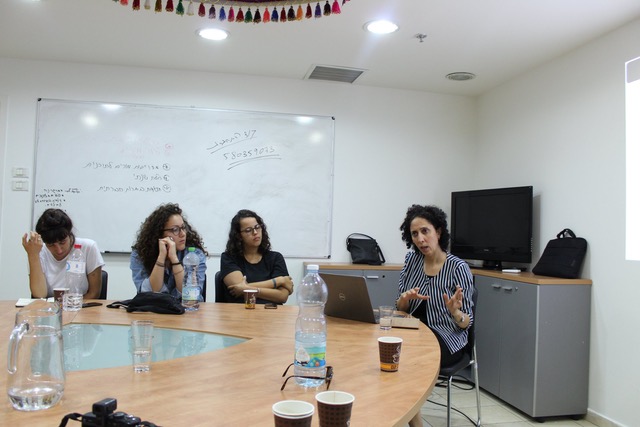 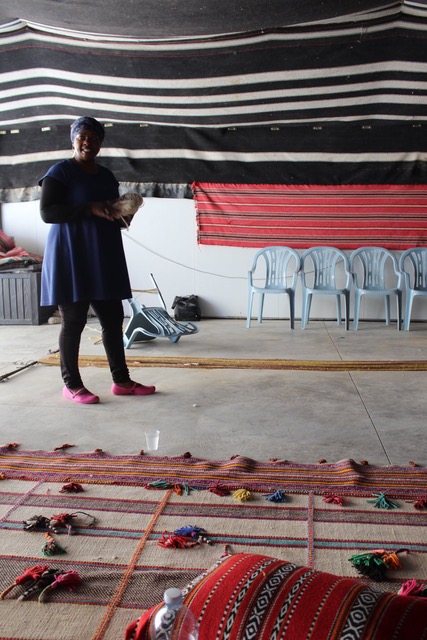 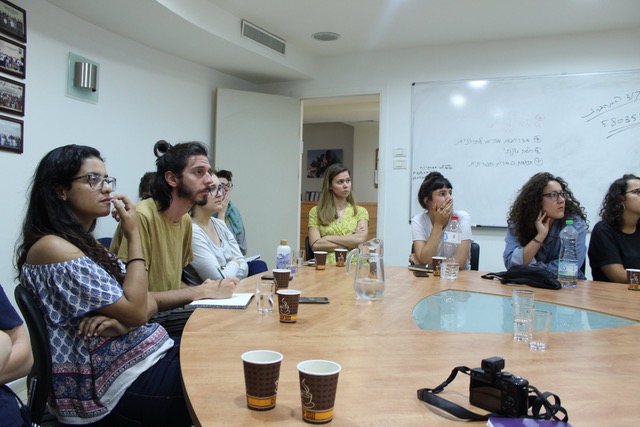