This city tour, organized jointly by WBC and Holy Local Aliens, had neither a single guide nor a pre-determined route. It was created by its participants, who were asked to suggest places and sights connected to Europe. The twenty participants gathered on October 30th at the YMCA, opposite of the famous King David Hotel. These two locations where the first out of eleven places along the route through the Old City, Nevi’im Street, Me’a She’arim, the City Center and Nachlaot.

Ten of the participants presented to us the locations they have chosen and explained their historical, cultural and personal backgrounds, as well as the reasons they relate these places to Europe. The history of the Jaffa Gate area reflects European Influence – from Roman times up until the 20th century. The New Imperial Hotel right behind Jaffa Gate is located where one of the tenth Roman Legion was based; a column with a Roman inscription can still be seen in the courtyard. In 1898, Germany’s Kaiser Wilhelm II visited Jerusalem and stayed at the Grand Hotel with his wife Augusta Viktoria. European banks, tourist agencies and post offices were located in the vicinity of the gate. After the British took charge of Jerusalem on December 9th 1917, General Allenby walked through the Jaffa Gate.

Right behind Jaffa Gate is the Armenian Quarter, where the participants where welcomed by Malkon, an Armenian resident of the Old City. He explained about the European origin of the Armenian people, their religious history and the genocide they were subjected to in 1915. He also invited us to this home, where we had snacks and personal conversations.

We left the Old City through Damascus Gate and stopped at the German Schmidt School before we walked down the most European and international street in Jerusalem: HaNevi’im, the Street of the Prophets. As Jerusalem expanded outside its walls during the mid-19th century, HaNevi’im Street became home to consulates, hospitals and hospices, as well as notable private homes such as the Tabor House, which was built in 1882 by German archaeologist, missionary and architect Conrad Schick.

Ruth, one of the participants, introduced us the first European Jewish Hotel in Jerusalem: Hotel Kaminitz, hidden in a backyard near Davidka Square. Apart from a few spooky stories, the hotel is also known for Theodor Herzl’s one-night stay in 1898; as the Kaiser’s entourage had taken up every available guest room, Herzl had no choice but to spend the night in the corridor of the hotel.

At a Russian grocery shop near Mahane Yehuda Market, Sasha, another participant, introduced us to post-soviet shopping culture. For many immigrants from the former Soviet Union, this weekly shopping trip connects them to their past, with shelves stocked with dried mushrooms, Russian beer and sweets, and even pork sausages in the fridge. The last stop on the tour was the Greek synagogue in the Greek neighborhood of Nachlaot.

The participatory tour formed new connections between its participants. They changed their roles during the tour, from a speaker to a listener and vice versa. By sharing oral history, people did not only connect to the places and sights, but also to each other. The participants shared, networked, discussed and exchanged. This also allowed underrepresented narratives to surface and challenge the dominant discourse which shapes places and the city. 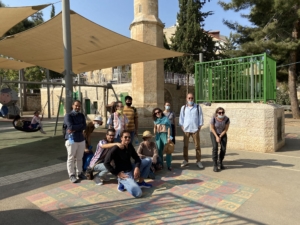 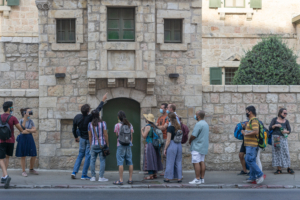 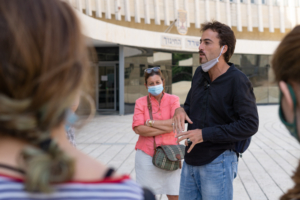 The Miracle of the Lights in the Desert
Scroll to top