“It’s a miracle that we are all gathered here”, said one of the participants in the “Lights in the Desert“ events. People from all over the area gathered in a Bedouin tent in the desert, to light beautiful Hanukkah menorahs on the last day of the Jewish holiday of light. We decorated Sufganiyot – the traditional Hanukkah donuts – and grew quite spacy and imaginative in a UV-light meditation-painting workshop. Whether in the campfire or while watching the sunrise over the Dead Sea, people got to know each other across all borders.

Hanukkah is the Jewish holiday commemorating the restoration of the Holy Temple in Jerusalem at the beginning of the Maccabean revolt, which took place during the 2nd century BCE. It is also known as the Festival of Lights, celebrating the miracle of the one-day supply of oil that miraculously lasted for eight days and kept the Temple Menorah lit. For this reason, Jews celebrate this eight-day holiday by lightning one more candle each day on the nine-branched candelabrum  called Hanukkiah.

This event, initiated by Holy Local Aliens and supported by the WBC, enabled a group of Israelis, Palestinians and internationals to celebrate Hanukkah together, meet each other and get acquainted with the Bedouin community that hosted us. Many of the participants brought their own hanukkiahs, some very classic, others very creative. After some explanations of the history and meaning of the holiday, we lit the candles together while singing songs and enjoying the lights in the dark.

After eating a vegan version of a typical Bedouin dish called Zarb, which is made of vegetables that areroasted underground , we split into different groups. One group decorated the Sufganiyot,  another was learning about the stars and planets that could be seen in the desert, and the last group participated in a UV-light meditation workshop, painting with UV-colors while listening to relaxing music. The participants shared their work and reflected their thoughts, individually and in couples.

Early the next morning we woke up before sunrise and drove with jeeps through the desert towards a cliff above to Dead Sea, to enjoy the sun rising over the mountains on Jordan. While having a Bedouin breakfast and hot tea, the group had plenty of time to talk, discuss and exchange. 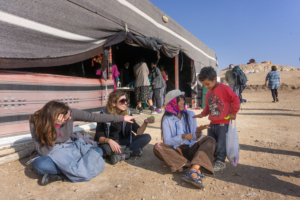 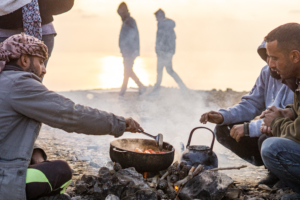 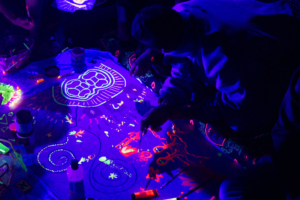 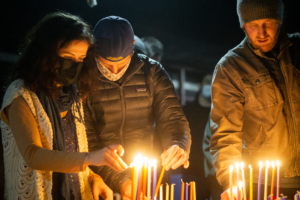